Dear Glenn,
Happy New Year and a very belated thank you for your outstanding performance for our clients, Jostens Learning and The Robert Bosch Corporation. We continue to receive rave reviews and you were the highlight of both evenings.
Glenn, your unique program, professionalism, ability to connect with any audience, work in varied venues and your dependability keep you at the top of our list as a recommended entertainer for our clients. You never let us down!
Best wishes for a happy, healthy and successful 1997. I look forward to working with you again in February at The Westin Mission Hills Resort.


To Whom It May Concern:
I had the pleasure of contracting Glenn Singer to perform at the 2nd Annual Universal City Walk International Street Performer's Festival in Los Angeles from September 22-25, 1994.
Glenn's energy and unique talents were incredibly popular with the crowds, thus making his alter ego, "El Gleno Grande,"one of the smash hits over the entire weekend.
Not only did Glenn bring his street savvy and deft humor to our event, but he was very helpful and accommodating in participating at a charitable performance for the L.A. Children's Hospital. He was also an asset by sharing his opinion and expertise to various aspects of the festival as a whole.
Glenn brings with him a high level of professionalism and an incomparable act which will draw raves anywhere. I highly recommend him (and his counterpart "Siegfrido") for any endeavor you may be planning.

TO WHOM IT MAY CONCERN:
As the director of Lower Manhattan Cultural Council's Buskers Fare, which just completed it's 3rd season of presenting top international street acts throughout the avenues and plazas of New York City's Financial District,I am pleased to recommend the work of Glenn Singer to cap any organization's programming or entertainment needs.
Glenn and his incomparable "horse" companion represent the best of contemporary comic vaudeville; a personality plus, if you will. Glenn's professionalism and adaptability make him an event lagniappe, that "little extra something" that makes "El Gleno Grande" a headliner. At the Buskers Fare, Glenn has been a consistent and winning crowd pleaser, topping audience surveys as a favorite entertainment. Our festival requires performers to be skilled in the corporate boardroom, on the mainstage, as well as in the street: In Glenn's case, he's "win, place, and show!"
If you desire further comment, feel free to call me at the Lower Manhattan Cultural Council,(212) 432-0900.

To Whom it May Concern,
With a record attendance of 130,000 people, the 1995 Summer Lights in Music City festival featured over 300 performances of all kinds; from Music City's own country music to jazz, rock; theatre, dance and street performance. Downtown Nashville is still ringing with the laughter from the wild & wacky performances of "El Gleno Grande." His show was a highlight of this year's festival. Without a doubt, Glenn Singer's performance was a key element in our success.
Glenn's show is unique, captivating and really, really, funny. Time after time I would walk past "El Gleno Grande" and see the delighted faces of his audience. Truly I have never seen that many people laugh that hard!
Not only was Glenn's show hilarious but I found him to be extremely helptul on-site. He was professional, very gracious, reliable and flexible. His experience and advice were as much a part of this year's success as was his performance. He was a pleasure to have involved in every way and I look forward to working with him again.
I highly recommend Glenn Singer. Feel free to contact me if I can be of any further help.

To Whom It May Concern:
I was fortunate to have had the extreme pleasure of working with Glenn Singer during the 1993 Piccolo Spoleto Festival. I can say, in all honesty, that without the magnanimous and magnetic personality of Glenn Singer, this festival would not have seen the success that it did.
His performance is without equal... and it genuinely appeals to people of all ages. I programmed Glenn's shows at numerous sites throughout the city as part of our ARTREACH program, the segment of the festival that reaches out in to the community to those people who would otherwise not experience it. From the Medical University of South Carolina's Children's Hospital to the Florence Crittenton Home for Unwed Mothers to the steps of the U.S. Customs House, Glenn brought joy and laughter. The festival-goers were looking for him everywhere, people just couldn't get enough. Consequently, we added a series of street performances, many of which were attended by more than 500 people.
Smiling faces, eyes full of wonder and shrieks of laughter were testimony to the success of Glenn's shows; it was one of the most rewarding aspects of my job to see so many people so elated and having such a great time. Glenn's talents are unsurpassed and his spirit exhilirating; his integrity and insight make him a pleasure to work with. For the ten days he was here, I always knew I could count on him and that his audiences were well taken care of.
In short summation, "El Gleno Grande" is magnificent, fabulous, stupendous. He receives my highest recommendations. 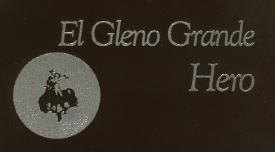